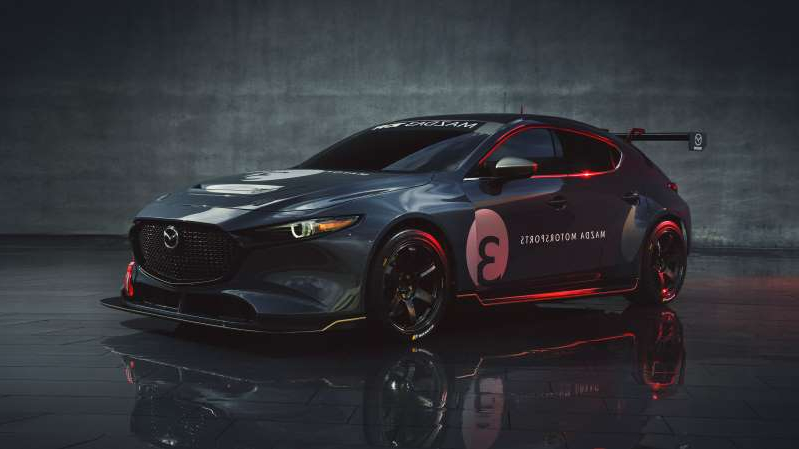 It’s not a production car, but Mazda has finally built the hotter 3 hatchback so many people have been craving. Shame it’s for race teams only.

Mazda has finally given the 3 hatchback a turbo engine, a more aggressive body, and a track-ready suspension – but it’s reserved for TCR racers only. Boo!

TCR regulations force manufacturers to run with a production-based 2.0-litre four-cylinder petrol engine outputting around 260kW. Power is put to the front wheels through a six-speed sequential or dual-clutch transmission.

With that in mind, it’s unclear where Mazda has sourced the 2.0-litre engine in the 3 TCR. The company hasn’t mentioned where the engine comes from, but says the car is built by Long Road Racing, which also creates the MX-5 Cup car.

Previous reports have suggested a hotted-up Mazda 3 could utilise a variant of the aforementioned 2.5-litre engine, while Mazda itself has confirmed it’s interested in tapping into the fast-growing hot hatch market.

“The program manager did express the desire to see if he could get the 2.5 turbo into Mazda 3, that’s on his list, though it doesn’t mean it’s official. But looking to see where Mazda 3 could go,” Mazda Australia marketing director, Alastair Doak, told CarAdvice.

Mazda Australia issued the following statement about the TCR locally: “The vehicle is available for Australian teams to purchase (from North America) however Mazda Australia has nothing to announce regarding fielding a team in the local series.”