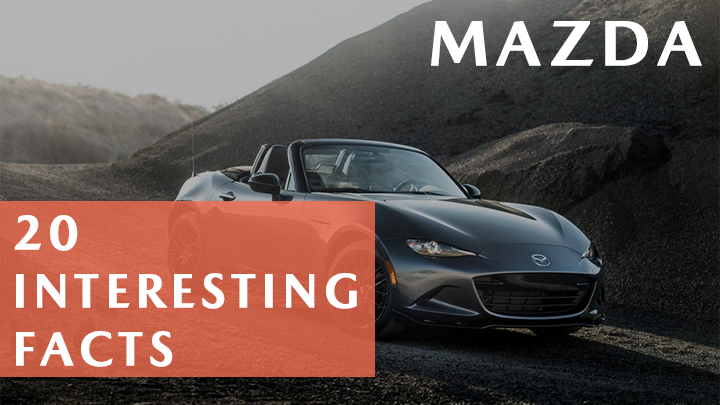 With a rich history of success and development, it is no surprise that Mazda is such a well know and trusted automotive company within the Australian Car market.

Below are 20 interesting facts you may not know about the brand:

1. Mazda Motor Corporation is a Japanese automaker with a long history. The company was founded in Hiroshima, Japan, on January 30 1920, under the name of Toyo Cork Kogyo Co., Ltd. At first, the Hiroshima-based company was producing artificial corks for the needs of Japanese army during World War I. This enterprise turned out to be unsuccessful and short-living, as it went bankrupt after the market for artificial cork dried up following the end of World War I. The successful Japanese manager and entrepreneur Jujiro Matsuda revived it in 1927. He dropped unsuccessful cork production business and focused on car manufacturing and company started to recover. In the beginning, the plant produced small three-wheeled trucks and motorcycles. After World War II, the Japanese company officially adopted the name Mazda and started to make products under its own logo.

3. During the 1920s, the company produced limited-edition motorcycles, which however were coldly received by the market. At that time, the Japanese company mainly produced machine tools. The situation changed in 1930, when the motorcycle built by Toyo Kogyo (word “Cork” was dropped from the official name in 1927) won a speed race, increasing the prestige and recognition of the vehicle manufacturer.

4. In 1931, the Japanese automaker introduced an unusual three-wheeled truck Mazda-Go. It turned to be so successful, that during the following fourteen years the company produced nothing but this model. At the dawn of World War II, after the Japanese government had been taken over by the militarists, Toyo Kogyo got involved in the production of military equipment.

5. After World War II, the Japanese company officially adopted the name Mazda and started to make products under its own logo. The very first 4-wheel truck Mazda Romper left the factory in 1958.

6. The company released its very first passenger car in 1960. It was a small rear-engine four-seat coupe Mazda R360. A year later, Japanese car manufacturer introduced the pickup that was marketed under the name of Proceed B-series 1500. In 1962, two models joined the Mazda lineup: two-door sedan Carol 360 and four-door sedan Carol 600.
7. In 1963, Mazda developed its first rotary engine. This type of engine is responsible for the worldwide success and recognition of the car manufacturer.

8. In 1967, Cosmo Sports 110S appeared on the market, equipped with a rotary engine. This year was a breakthrough for the Japanese manufacturer, because it was decided to mass export cars to Europe, and three years later also to the US. The production plans include new models of cars with rotary engines, including Familia R100, Savanna RX-3 and Capella RX-2

9. In 1970, Ford Motor Company acquired a quarter of all shares in Toyo Kogyo. Later in 1984, the Japanese automaker officially changed its name from Toyo Kogyo to Mazda Motor Corporation.

11. In 1989, the Japanese company introduced the first generation of the world-famous roadster Mazda MX-5.

12. In 1991, Mazda forever scribed its name in the history of motorsports. The sports prototype racing car Mazda 787B won the prestigious race 24 Hours of Le Mans, also known as Grand Prix of Endurance and Efficiency. What makes this triumph special is the fact that to this day it remains the only victory by a Japanese marque as well as the only victory by a car, powered by a rotary engine, in the history of this motorsports competition.

13. According to the 2007 data, the company has working assembly factories in 21 countries. Those facilities produce vehicles that are sold in more than 120 countries.

14. Japanese automaker produced the famous Mazda RX-7 from 1978 to 2002. This sports car, powered by a two-section rotary-piston engine had many followers among Mazda aficionados and the general public.

15. In 2000, the Mazda MX-5 roadster hits the Guinness Book of Records as the best-selling two-seater sports car with over half a million cars sold. By 2015, the number of sales approached 1 million mark.

16. In 2003, the main award of the international competition “Engine of the Year” and the title “Best New Engine” was won by the Mazda Remesis rotary engine, mounted on the Mazda RX-8 sports car. The same engine got the first place in the category of engines with volume from 2.5 to 3.0 litres. Thus, Mazda’s 240-horsepower engine managed to win three awards at once.

17. In 2006, the Japanese automaker opened its performance division under the name of Mazda Performance Series or simply MPS. The cars with the MPS index are characterized by higher speed and power.

18. Mazda used a wide range of emblems throughout its history. The most recent version has been in use since 1997. The designer Rei Yoshimara reported, that he was thinking about an owl while creating it. He was somewhat surprised when someone from Mazda management saw the letter “M” in it. Later, the company came out with an explanation that a redesigned winged “M” symbolizes Mazda with stretched wings. After all, equivocality may be one of the key features of great art and design.

20. Since 2000, Mazda has used the phrase “Zoom-Zoom” to describe what it calls the “emotion of motion” that it claims is inherent in its cars. Recently its slogan has been changed to “Driving Matters”.