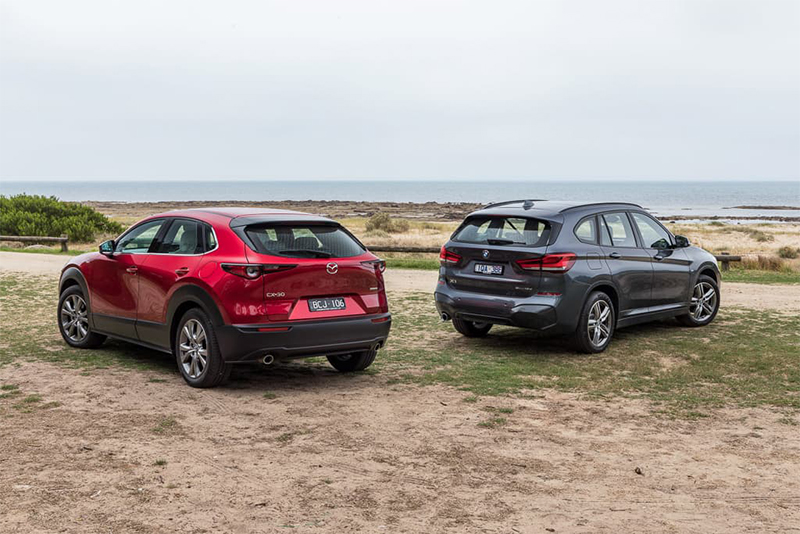 On the surface a comparison test between the all-new Mazda CX-30 and BMW’s freshly facelifted X1 doesn’t make a whole lot of sense. After all, Mazda is a mainstream brand and BMW is unquestionably from the snooty end of the street. But these days Mazda is employing a bold global strategy to push its quality and image that little bit upmarket. If successful that will enable it to charge that bit more and make that little bit more profit, which is pretty crucial when you’re a small – by auto standards – independent like Mazda. So following on from the Mazda3 small car, the CX-30 is the second attempt at ‘Mazda premium’. We figured the best way to see if it actually stands up was to test one of the most expensive versions against something, well, premium. Enter the BMW X1 sDrive 18d.

Why are we comparing them?

To be honest, the Mazda CX-30’s opponent could have also been an Audi Q2 or Q3, a Lexus UX or even, a Volvo XC40. Yes, you could lob in the Mercedes-Benz GLA-Class but it’s in generational change-over right now.

The core requirement for a rival was a vehicle that represented a badge with solid premium credentials. That it turned out to be the best-selling premium compact SUV in the world sealed the deal.

The CX-30 G25 Astina is five-door, five-seat hatchback powered by a 139kW/252Nm 2.5-litre naturally aspirated petrol engine mated to a six-speed automatic transmission that drives the front wheels. A more expensive all-wheel drive version is due in March.

The X1 sDrive 18d is also a five-door five-seater, but sticks more to the traditional SUV shape than the Mazda.

Our test vehicle came with a 103kW/220Nm 2.0-litre turbo-diesel engine mated to an eight-speed auto that also drive the front wheels. A front-wheel drive BMW? Yep … and it even tugs the steering wheel a little under hard acceleration, an FWD signature known as torque steer. Weird in a Bimmer.

The 18d is the second cheapest model in the line-up undercut only by the $44,500 sDrive 18i turbo-petrol triple-cylinder. Sadly, that car was unavailable for this test. 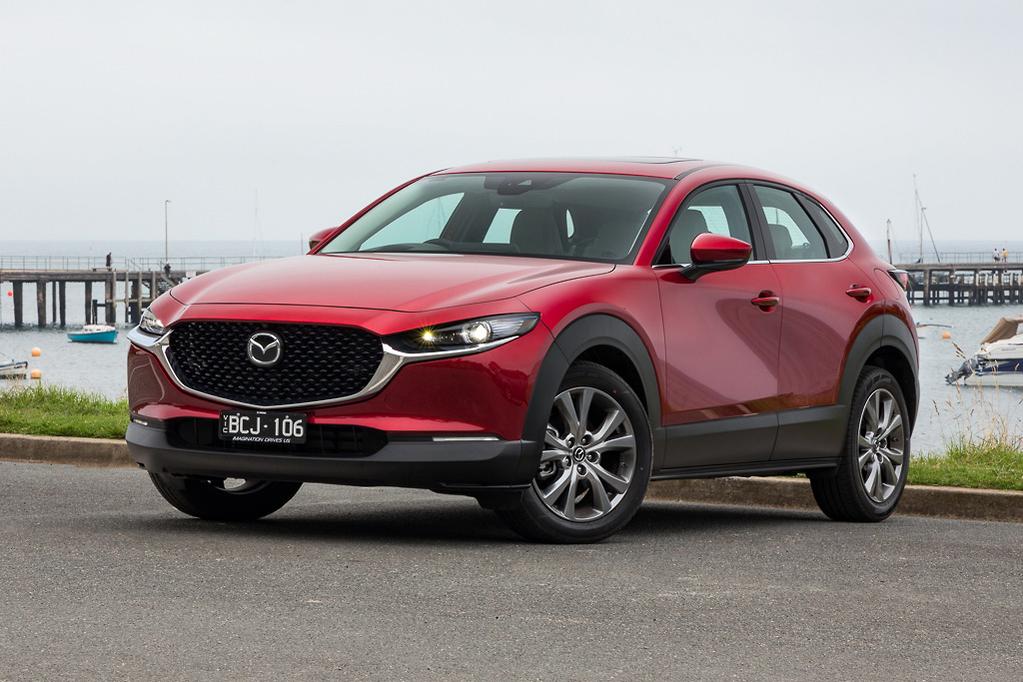 Who will they appeal to?

These two target different audiences and not the ones you would expect.

The Mazda’s sexier shape makes it a more compact car and more suited to singles and couples than families. It’s got high levels of refinement and it is extremely well equipped.

The 18d is more attuned to a family audience because of its shape and space. Its close relation the X2 is more about the style-conscious audience the CX-30 targets. 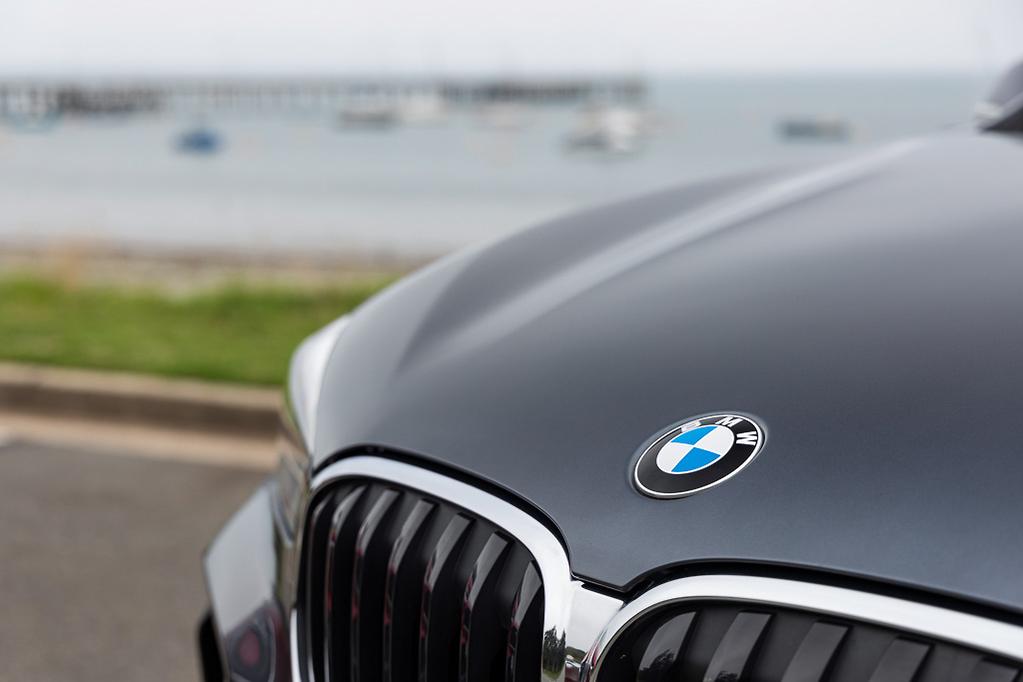 How much do they cost?

The Astina’s equipment level is high, especially when it comes to safety equipment. On top of the now-expected autonomous emergency braking (AEB) and full suite of airbags, there’s a ‘Vision Technology’ package standard only on this model that includes a 360-degree camera and semi-autonomous ‘Cruising and Traffic Support’. 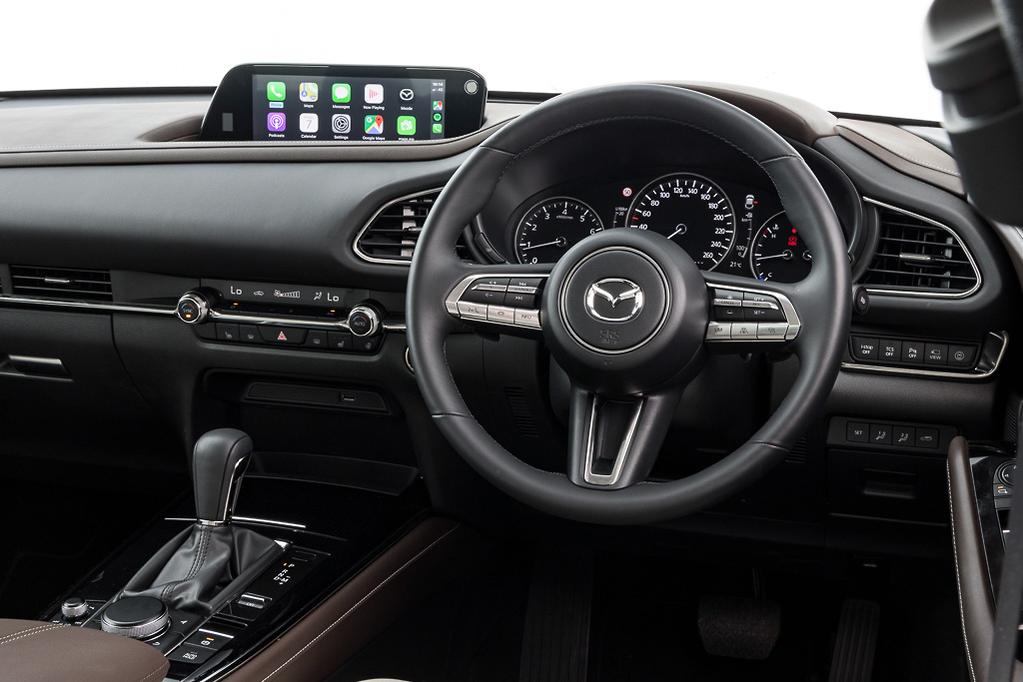 The BMW is not as well equipped. For starters, it has manually adjusted front seats and an unassisted tailgate, deficits that are noticed in seconds and never forgotten. It comes with single-zone climate control (and no rear vents), only Apple CarPlay, a reversing camera rather than a 360-degree view, artificial Sensatec upholstery and passive rather than adaptive cruise control. 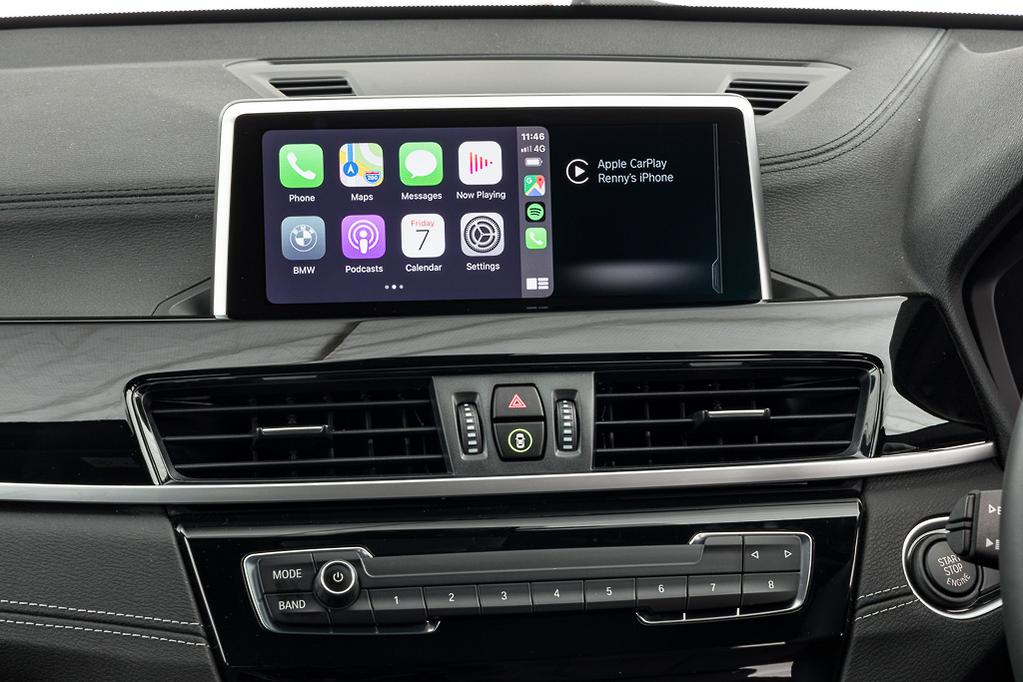 A rare equipment advantage is wireless charging. There’s also a lifetime subscription to BMW ConnectedDrive with its online services and emergency call feature.

That all seems a bit bare, but it’s the high-end safety equipment where the shortfall is most palpable. The AEB system warns the driver of an obstacle and slows the car but doesn’t stop it like most systems do these days.

By the way, our test car came with nearly $8000 worth of options including a $2500 M Sport pack which offered – amongst much more – sports seats and sports suspension. 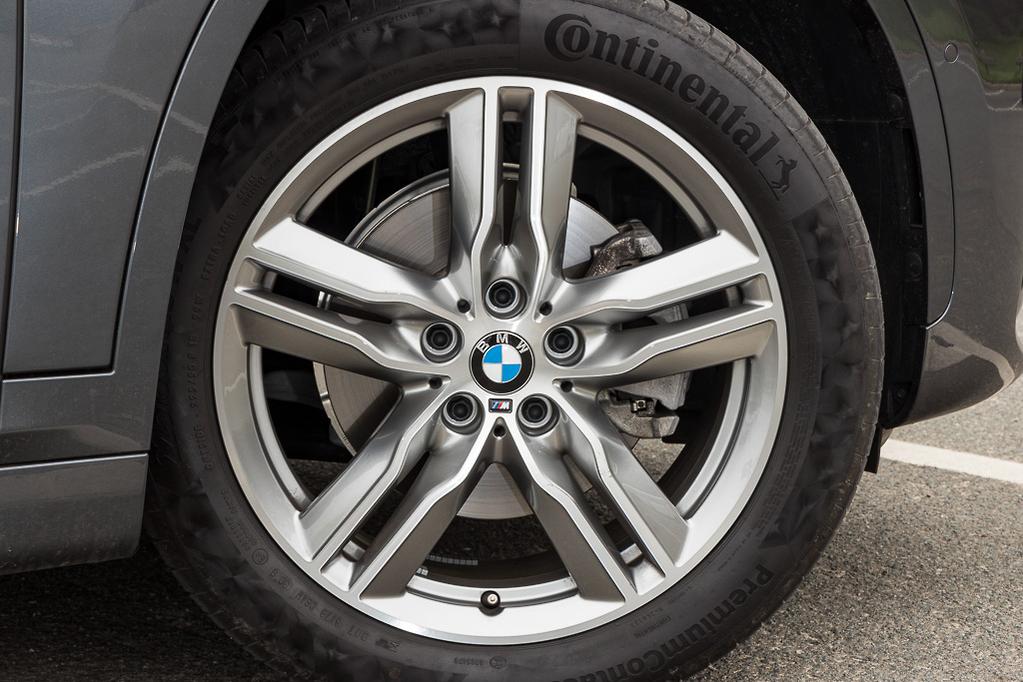 Both cars have the maximum five-star ANCAP rating, but the CX-30’s is from 2019 and boasts the highest adult occupant protection rating ever recorded by the independent safety body. The X1’s rating is from 2015.

The CX-30 is protected by a five-year/unlimited-kilometre warranty and a capped-price servicing schedule that requires a visit to the dealer every year or 10,000km. That km number is low these days. Over five years or 50,000km – the latter will come first for a lot of people – that will add up to $1716.19.

The BMW has only a three-year/unlimited unlimited-kilometre warranty and servicing is when required rather than specified by kilometrage or date. A basic five-year/80,000km service package for your X1 will cost $1550. The Plus package is $4420. 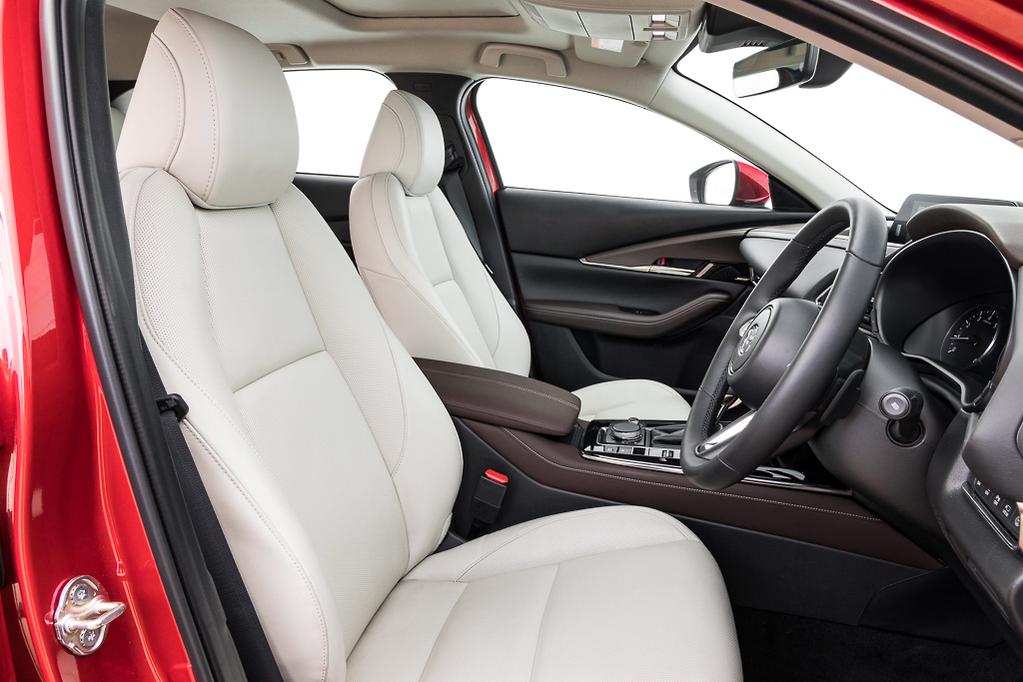 What do they do well?

If we hadn’t already experience the Mazda3 then the CX-30 would have been a revelation, so improved are its standards of interior quietness and refinement.

The CX-30 benefits – as the 3 does – from riding on a new generation Skyactiv architecture that incorporates a whole new level of noise, vibration and harshness measures.

The other attribute the new platform helps with is the composed, light and faithful on-road behavior of the CX-30. It’s equally welcoming to drive in-town or out in the country.

Then there’s the presentation of the interior. This is where ‘Mazda premium’ is most obvious. The controls are simplified, the look is streamlined and most importantly, it works without fuss or complexity. Plaudits to the new seats as well, they are very comfortable and supportive. 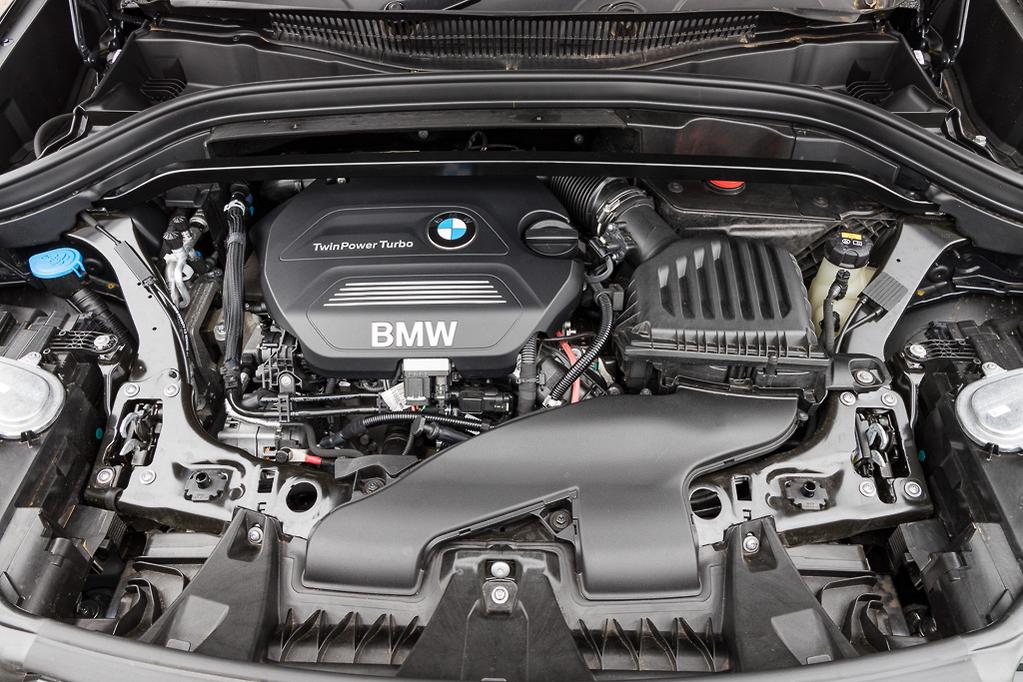 The X1 is also very refined, even if its diesel engine is noisier and more intrusive. But it also accelerates really strongly thanks to plentiful torque being produced from low in the rev range.

The X1 is also that little bit more solid on the road. No surprise considering it’s 117kg heavier than the Mazda at 1505kg kerb weight. It handles nicely, rides better and has nicer detail tuning in things like brake feel. The X1 may be a front-drive mini-bus, but it still has an engaging BMW soul. Who’d have thunk it?

Dial into the Sport mode and the X1 does notably change drivetrain character, becoming much more alert. There’s a Sport button for the Mazda too, but it’s far less impactful. Both cars have passive suspension, so no adjustment there. 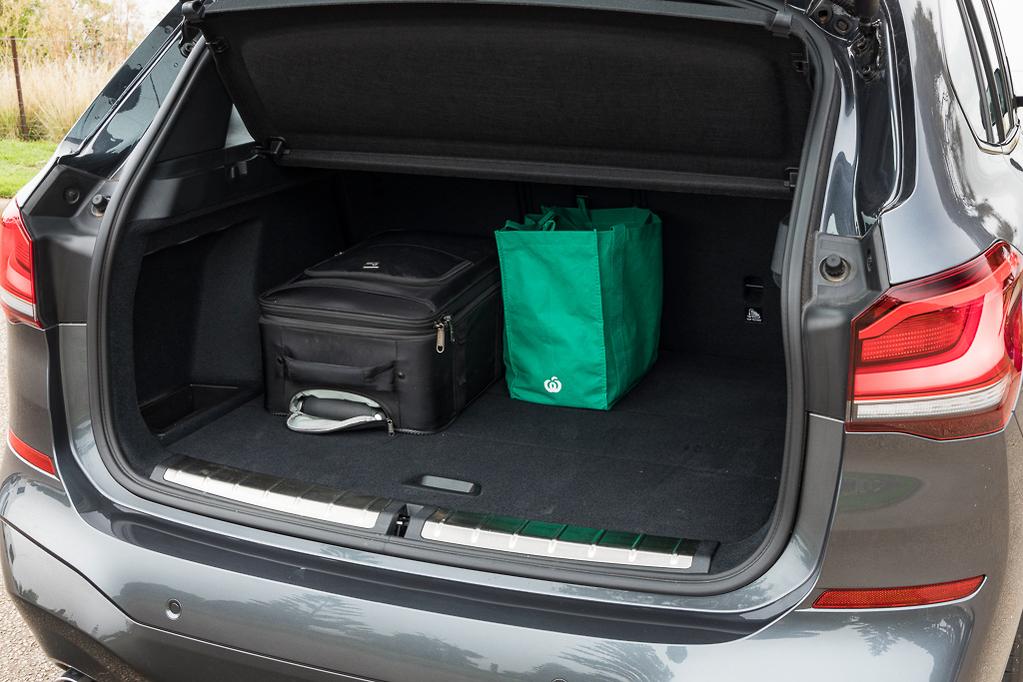 Interior space in the X1 is one of its big assets. The boot offers 505 litres of space before expanding to 1550 litres once you fold the three-piece rear seat down. Note though, that space advantage is aided by no spare tyre (run-flats remember). The Mazda, which measures up at 317/1406 litres, comes with a space saver.

That space advantage also transfers into the seating area. It’s not only legroom, but headroom where it has an advantage thanks to that far more conservative shape. 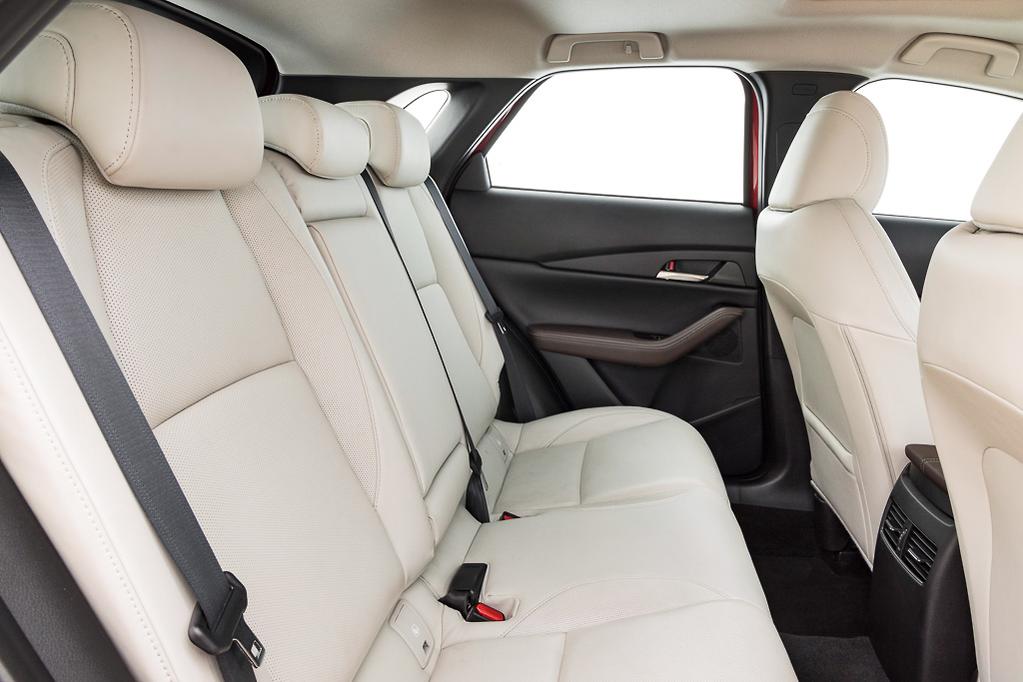 What could they do better?

If you haven’t pegged it already, one of the CX-30’s big issues is its limited cargo and rear-seat space. That’s the sacrifice you make for such a svelte shape.

But with the CX-3 and CX-5 already on-sale, the CX-30 clearly doesn’t need to appeal to buying audiences in the same way.

The Astina G25 rides on low profile 18-inch rubber and that seems to have an impact on ride absorption compared to the base-spec CX-30 Pure on 16-inch wheels we’ve also sampled. Maybe the CX-30’s use of a torsion beam rather than independent rear suspension plays into that too – Mazda says not.

The CX-30’s 2.5-litre engine is a solid unit, but it doesn’t have the same sort of low-down punch the X1 and its more usual turbo-petrol rivals offer. The flipside is a simpler engine with less bits that can go wrong.

And while we raise the interior design, some people are not going to like the non-touch 8.8-inch media screen in the dashboard. A head-up display does help compensate for that.

The X1’s interior presentation, highlighted by a new 8.8-inch touch screen with app-style interface is better after the update but lacks the modern clean design and simplicity of the Mazda. It’s very familiar BMW, but not the much-lauded latest generation design. Some things were simply too complex. Finding Apple CarPlay was a complex chore and even then the interface was darned distracting. 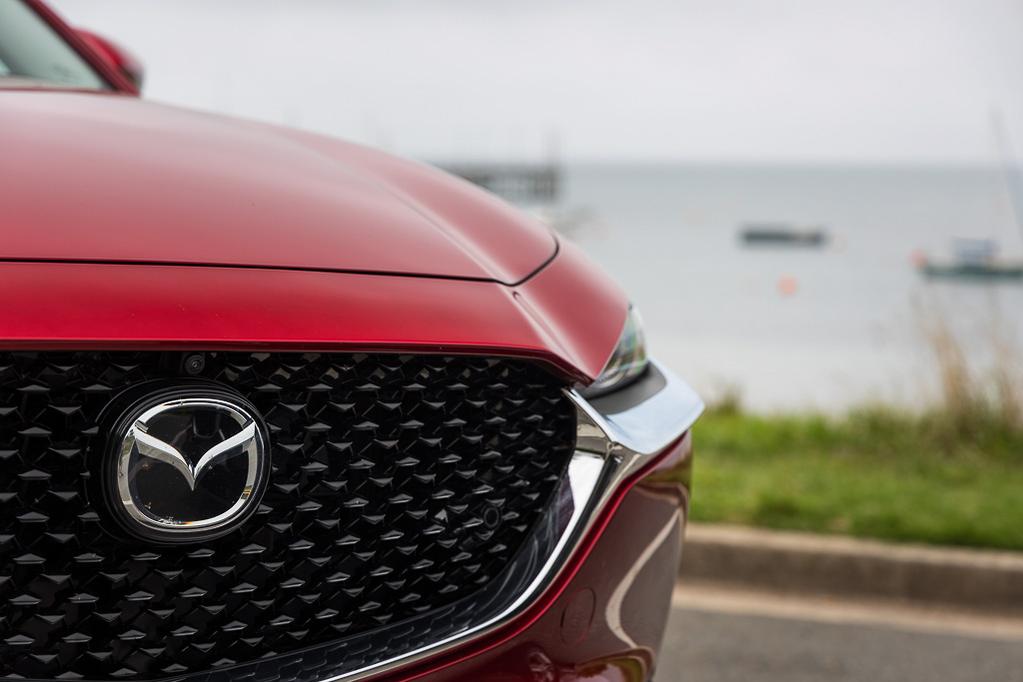 Which wins, and why?

Time and again we jumped in the CX-30 and were impressed by its refinement, elegance and ease of use.

The BMW is more family-friendly because of its wagon shape, has a more solid feeling to it than the lighter Mazda and is surprisingly engaging to drive. It really does feel like it has some impressive engineering behind it. If you have to haul lots of people and gear around all the time then it’s the one to go for.

Otherwise the Mazda inches ahead. It is such a nice place to reside and is better value, especially in terms of the latest safety gear.

So is Mazda premium more than a slogan? On this evidence the answer is a definite yes.